Brakspear have produced a delicious bespoke beer called ‘Writer’s Block’ for the Henley Literary Festival, which runs between 28th September to 6th October and whose special guests include Great British Bake Off judge, Prue Leith.

Writer’s Block is a rich, red ale brewed with Amarillo and jester hops and CaraRed melt, with 10p from every pint going to support the festival. 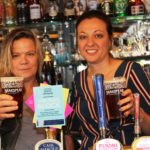 Thwaites Brewery are celebrating Cask Ale Week with the release of their new core range of 5 different beers.

The Goshawk are planning to have J.W. Lee Brewery’s New Zealand Session Ale available during Cask Ale Week, alongside other fantastic ales.

Joseph Hole Brewery are marking their 170th anniversary with the release of six new, specially brewed cask ales which tell the story of Joseph Holt from their 1849 origins to the present day.

The six new brews, making up the 170 Cask Ale Programme, have been created to celebrate the six generations of family who’ve led Joseph Holt from the beginning.

In pubs where the ale is served, customers can get more information about the story behind each beer by scanning a barcode at the pump with their smart phones.

Codenamed G1 to G6, each cask ale is only available for two months before the story moves on to the next generation.

The current one available is G2, known as the Mayor – a premium cask lager with a light, straw colour and floral smell.  It’s brewed with Styrian Goldings and choice lager malt to give a crisp and refreshing taste at 4.6% ABV. It is available until the end of September from participating pubs.

You can find more information about our 170 Cask Ale Programme here: https://www.joseph-holt.com/the-mayor-170-cask

Newton Brewery are celebrating Cask Ale Week, and the 50th anniversary of the Ministry of Defences’ Institute of Naval Medicine, by providing 2 specially brewed casks of ale. Guests at the INM’s celebrations, held on Thursday, 26th September, will be the first to sample the limited edition 4.5% abv bitter that gives off passion-fruit and mango aromas & flavours.

A second cask will be available for the general public to try at The Four-Ale Taproom, Gosport from Friday, 27th September!

Cask Ale Week is the perfect excuse to promote your pub or brewery to your customers! Add your events today.

PROUDLY BROUGHT TO YOU BY

We do not encourage under age drinking. Drink Aware

This site is for over 18’s only. Please drink alcohol responsibly.